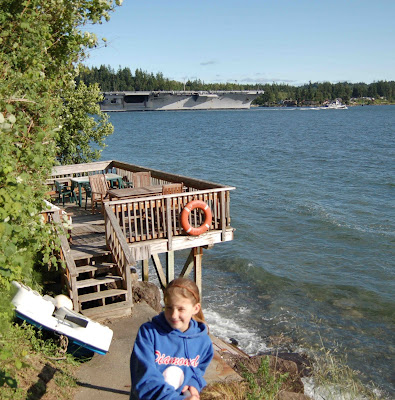 Yesterday afternoon we could see this aircraft carrier sailing by our island. So my daughter and I went down the street to our beach and we were able to watch this huge ship glide by on it's way to Bremerton,  a local Navy shipyard. 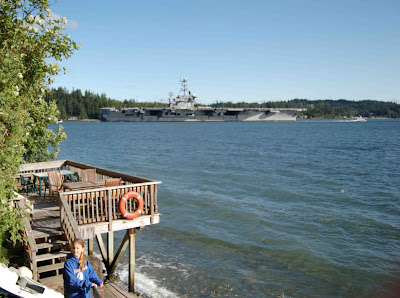 It's really quite exciting to see this huge ship maneuver through the Puget Sound. This ship is the Carl Vinson. 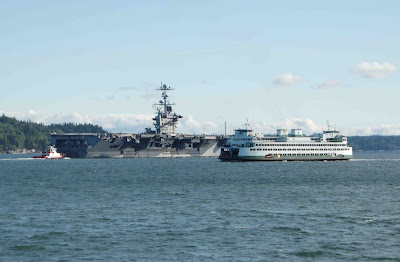 Here is a bit of interesting information about the Carl Vinson-
The crew of more than 5,500 sailors left 6½ months ago for a deployment that included air support for the wars in Afghanistan and Iraq, two pirate interdictions and the successful recovery of a fighter jet that caught fire.
The flattop’s tour was so busy it managed only one port call. The crew spent so long at sea the Navy granted them a “beer day", (two brews apiece) and a rare chance to jump off the ship and swim the open ocean. Cap. Bruce Lindsey, commanding officer of the Carl Vinson said, “Americans are definitely getting their money’s worth from these sailors.”
The captain declined to discuss former al-Qaeda leader Osama bin Laden, whose body was flown to the Carl Vinson last month for burial .
Loose talk could put his sailors at risk. However, Lindsey said: “They’ve been a part of history, and they should be very proud.” 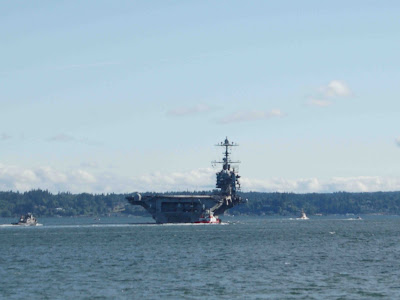